North of the Amazon River mouth is Amapá, one of Brazil’s great wetland states. The Amazon River borders Amapá’s southern coast and, mixed with oceanic waters, laves its Atlantic coast. Amapá has two large rivers, the Araguari and the Oiapoque, the latter shared by Brazil and French Guiana. Both rivers are less than 400 km long and have headwaters on the Guiana Shield. Most of Amapá is still forested and there are large savanna areas on its eastern half. Coastal Amapá is one of the rainiest areas in the Amazon region. Annual totals are usually more than 3,000 mm.

The Araguari was the first relatively large river in the Amazon to be dammed. The Coaracy Nunes Dam was constructed to supply energy for a local multinational manganese industry and for Macapá, the capital of the state of Amapá. The Araguari was impounded in 1972. Any associated environmental impacts have yet to be studied scientifically. Local fishermen have not reported any major effects on fisheries and migratory species are still found below and above the dam.

The Serra do Navio manganese deposits in the headwater region of the Araguari River were largely depleted by the 1980s and mining operations folded in the late 1990s. Gold mining in the upper Araguari Basin was intense between the early 1980s and mid-1990s. As in most of the Brazilian Amazon, gold mining has declined in Amapá since the mid-1990s. Cattle ranchers are now colonizing Araguari riparian forests below the dam and deforestation is increasing. 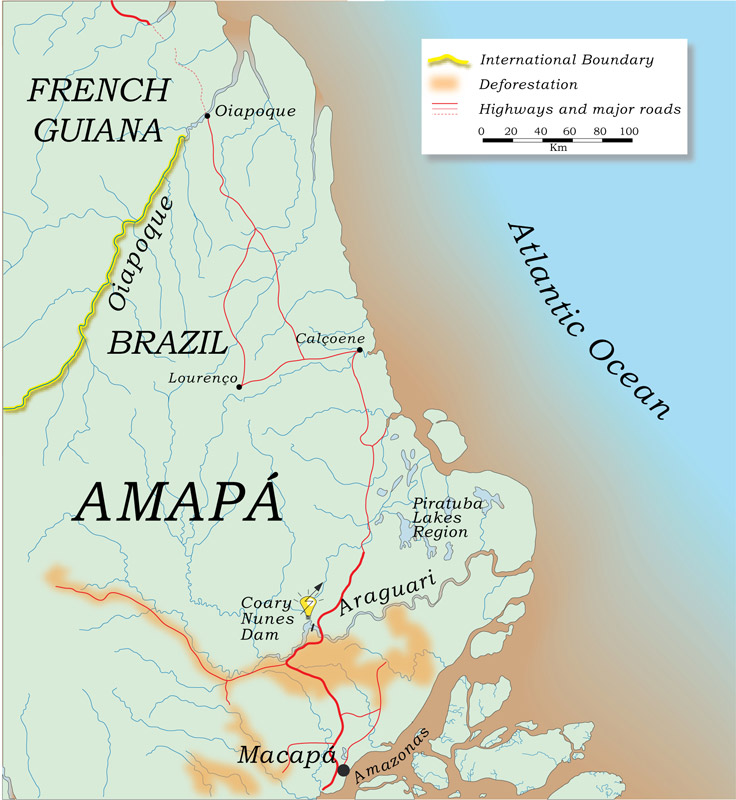 Amapá is a staging ground for large-scale tree plantations in the Amazon Basin. The savanna-scrub regions between about Macapá to beyond the Araguari River have been cleared and planted with eucalyptus and pine. Headwaters of short coastal rivers originate in these scrublands. Swamp forests dominated by the buriti (Mauritia flexuosa) often form long palm corridors, but these are being rapidly destroyed by plantation development.