Encompassing approximately 49,000 km2, Marajó is the largest river island in the world. Marajó is larger than all Caribbean islands except Cuba and Hispaniola (the Dominican Republic and Haiti) and it is more than four times the size of Jamaica and five times that of Puerto Rico. A few European countries, such as Belgium and Switzerland, are smaller than Marajó.

Geographically, Marajó Island is naturally divided into two halves: its eastern half with relatively large savannas and its western half with sweeping forest. Most of the giant island is subject to seasonal or tidal flooding. Numerous tidal rivers less than approximately 100 km long slice through the western, forested region. The eastern interior of Marajó forms an enormous inland basin that collects rainwater, which inundates the area for about six to eight months annually. The huge flooded forests of Marajó are related floristically to the Amazon River floodplain forest. Mangroves, which probably account for less than 10 percent of all floodable forest on Marajó, are found mostly along the northern coast and inland along Marajó Bay. 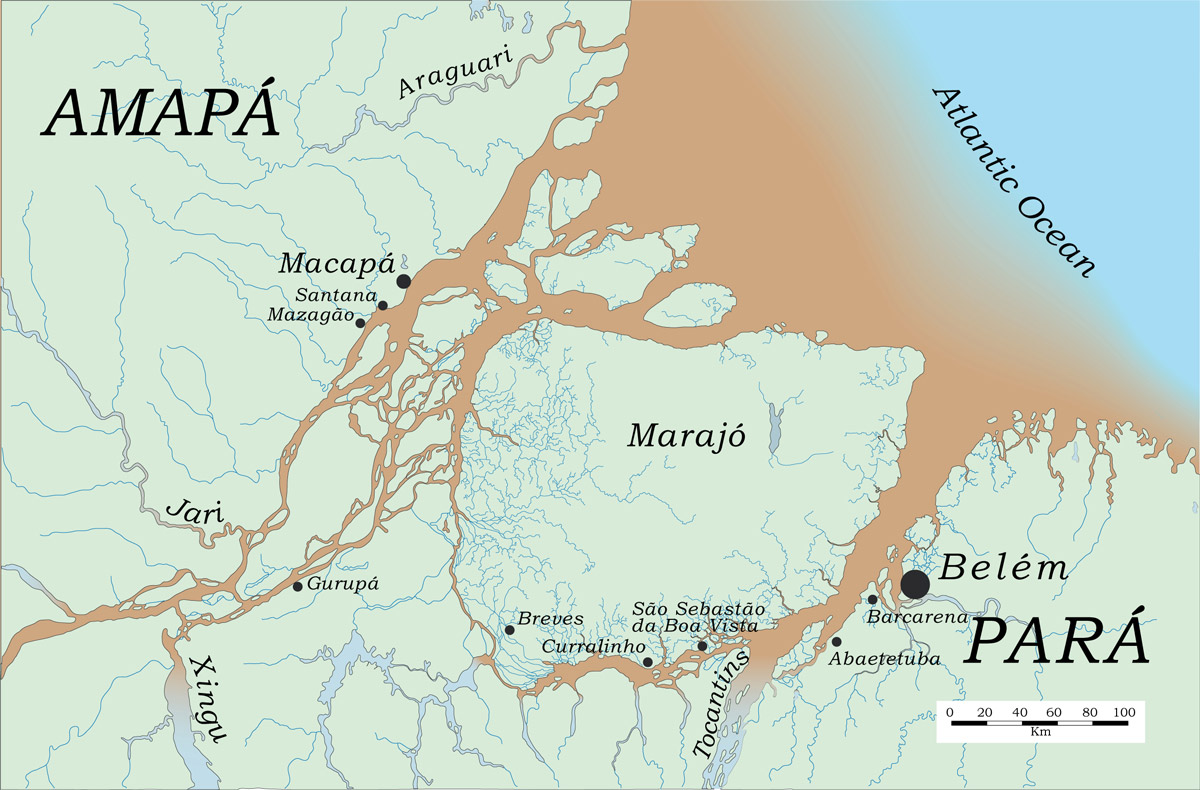 Indigenous peoples, Portuguese colonists, and Brazilian ranchers have all had major impacts on the landscapes of Marajó, especially in the eastern savannas. Marajó’s savannas have been burned for centuries, if not thousands of years. The Portuguese reported indigenous peoples using fire to corral turtles during the dry season and this practice continues. It is possible that most of the savannas of eastern Marajó have expanded because of burning. The forests that have survived, such as those dominated by swamp-loving palms, have perhaps been lucky enough to escape fire. With the expansion of modern ranching, however, cattle and water buffalo now trample through these swamp forests, destroying seeds, seedlings and saplings.

Arari is the largest lake on Marajó and the center of livestock ranching and fishing. The Arari River, whose mouth is just opposite Belém, connects the shallow lake to Marajó Bay. A canal on the northern part of Marajó, Canal da Tartaruga, was excavated in the 1950s to expedite shipping between Belém and Macapá near the Amazon River mouth. The canal, however, began to drain Arari Lake and it became necessary to build an earthen dam on the Arari River to save local fisheries. The Arari Lake region has been almost completely deforested and savanna grasses are maintained by fire. During the flooding season the Arari River is joined to one vast sheet of water that inundates the eastern interior of Marajó Island. A species of bottom-feeding armored catfish called tamoatá (Hoplosternum littorale) dominates the Arari Lake fishery. The high production of these catfish might be partly related to livestock feces washing into and fertilizing the Lake.

North of the savannas on the eastern half of Marajó Island are immense palm forests that remain swampy for most of the year. The buriti (Mauritia flexuosa) and açaí (Euterpe oleracea) palms dominate these forests. Açaí is exploited for palm hearts and helicopters have been used to transport it from otherwise inaccessible areas. Livestock invade the palm forests during the dry season and during the rainy season when water depth is less than approximately 50 cm.

Marajó Island’s western tidal forests have been heavily logged for select species. More than 200 sawmills are operating in the Breves region of western Marajó. Clear-cutting is not commonly practiced but instead individual logs are floated out of forests during high tides or during the rainy season. Valuable species are usually logged until no harvestable trees are left, at which point the next most valuable species is targeted. Harvestable virola (Virola surinamensis) trees, for example, have largely been cut and other species, such as assacu (Hura crepitans), are being logged. In the long run, the extent to which logging will impact western Marajó will depend on how many commercially valuable species are left.

Although the state of Pará considers Marajó Island a conservation unit, no protected parks or reserves currently exist on the Island or surrounding area. Ecotourism has been proposed as a management strategy for Marajó, because the Island was a major breeding region for wading birds. These rookeries, however, have largely been destroyed and no formal protection has been awarded to those that are left. If the Marajó environment and its inhabitants are to be protected, conservation planners will need to formulate a different management strategy.