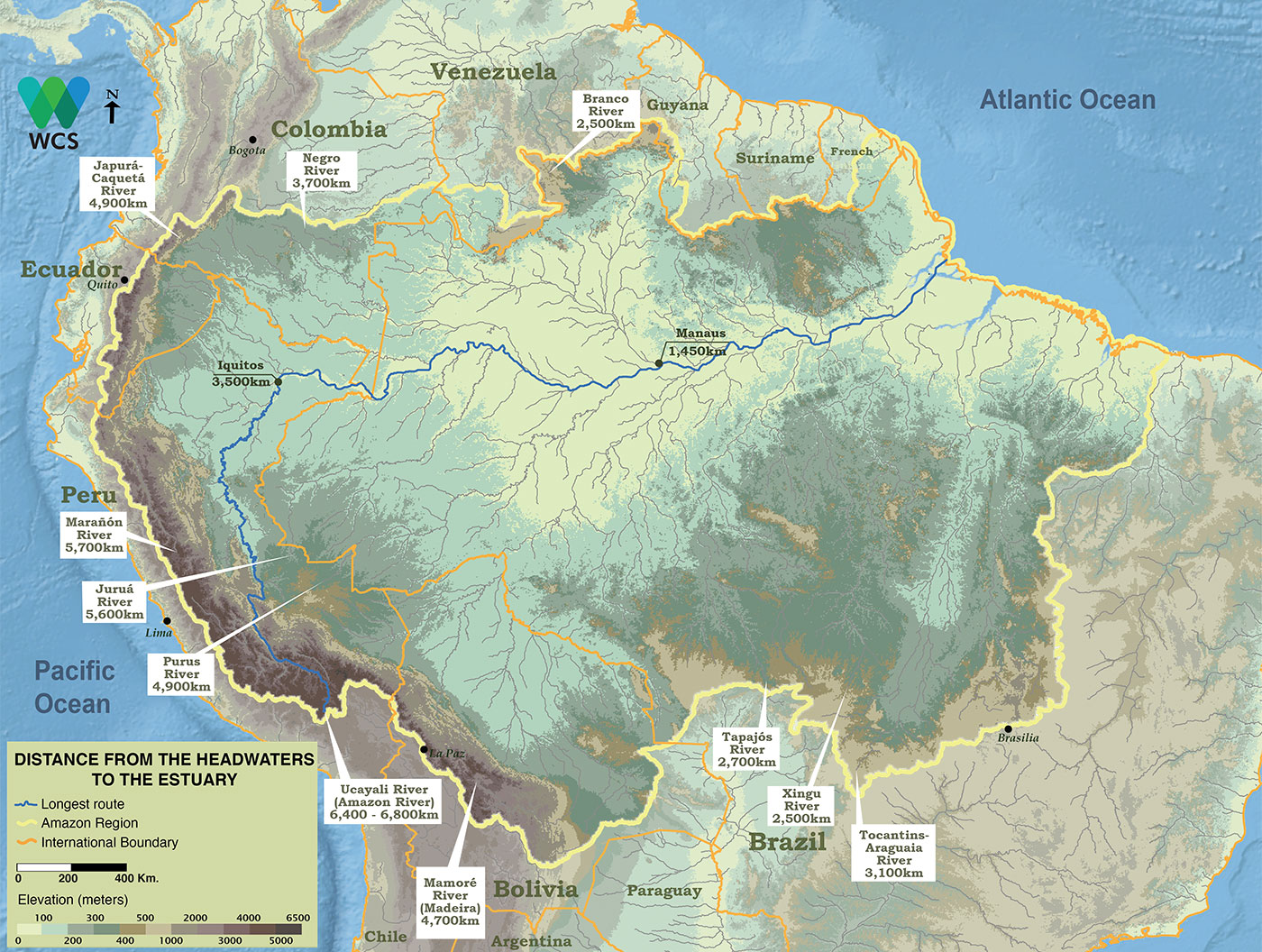 The Amazon River’s farthest headwaters are nearly 6,800 km from the Atlantic by way of the tributaries and main stem.

Using modern global positioning systems (GPS), recent expeditions have tried to pinpoint the Ucayali headwaters in the department of Arequipa, just south of the department of Cuzco, to within tens of meters. The aim of these expeditions is usually to determine if the Amazon River is longer than the Nile. The problem, however, is that expedition members did not re-measure distances to the Atlantic Ocean. Instead, they appended their new findings to downstream figures already published but not necessarily verified independently. There are plenty of estimates of the length of the Amazon River, ranging from 6,000 to 7,800 km. If the higher estimates are accepted, then one can conclude that the Amazon is indeed longer than the Nile.

The best estimate we have is that the Amazon River is approximately 6,500–6,800 km long if the mouth is located near Balique, just east of 50° W. The length of the Nile is usually stated to be 6,650 km. Needless to say, the “longest river” debate will continue to ping-pong until both rivers are measured in exactly the same way, at about the same time, preferably by the same team of investigators—one that includes partisans of both the Amazon and the Nile as the world’s longest river.

South Americans divide the Amazon River into four main stretches, with two stretches named “Amazonas”. Beginning upriver in Peru is the Ucayali, followed downstream by the Amazonas in Peru and Colombia. After entering Brazil, the Amazon River is called the Solimões until its confluence with the Negro, where it is again called the Amazonas. Amazon River headwaters of the Ucayali, in downstream order, are the Apurimac, the Ene, and the Tambo. The Amazon is the only river basin in the world that has three tributaries (the Purus, the Juruá and the Madeira) longer than 3,000 km. The Madeira, at 3,352 km, is the longest, but it is still second to the Missouri River, which at 3,726 km is the longest tributary in the world. The longest meandering rivers in the Amazon—the Purus, the Juruá and the Ucayali—are all southern tributaries. This serpentine trio is found in an enormous alluvial zone, where soft sediments have allowed the tributaries to meander wildly across their broad floodplains. The length of the Purus, for example, is more than twice the straight-line aerial distance from its mouth to its headwaters.